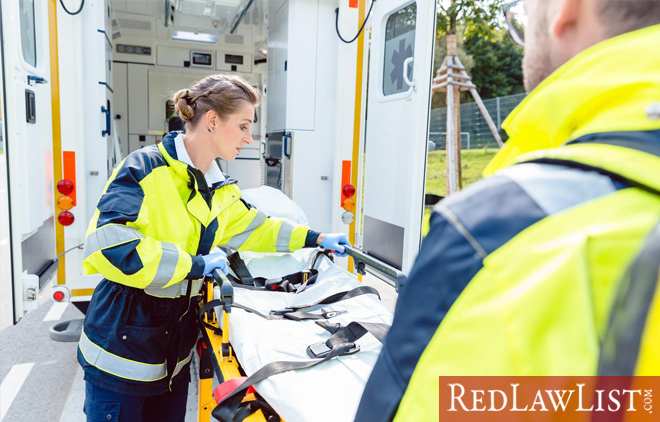 Josefina Rodriguez was being transported home from Houston Methodist hospital after undergoing a transplant procedure. She didn’t make it safely. The ambulance crashed into the back of a metro train, causing her death and injuries to her husband, Jose. Now, Jose and his daughter Adriana have filed a wrongful death lawsuit against ambulance provider Orion EMS and driver Jennifer Joana Granados.

Josefina had a successful kidney transplant. When it was time for her to return to the Rodriguez’s Sugar Land home, the hospital asked that she be transported by ambulance, as Josefina would be more comfortable on a stretcher rather than sitting upright in a car. Jose rode with his wife.

Traffic cam footage of the accident shows the ambulance cutting across traffic and then crashing into the back of the metro rail. Jose suffered injuries, including a herniated disk, that make it difficult for him to walk. Worse, Josefina suffered blunt trauma to her head from the crash. While she initially survived, she never made it back home, eventually dying of blood clots and fluids in the brain.

The metro train was traveling at 19 MPH, well under the 30 MPH limit that is posted near where the crash occurred. The focus of the lawsuit, according to family attorney Randy Sorrels, is with how the ambulance was driven.

“The Rodriguez couple entrusted their lives to this ambulance company,” Sorrels said. “Instead of transporting them with extraordinary care and caution, it appears the driver was either distracted or did not know where she was going when she illegally cut across two lanes of traffic…”

Upon impact with the metro trail, the ambulance was violently T-boned, with the Rodriguez couple hurled around the inside, thus causing the injuries.

The filing of the lawsuit will initiate legal discovery proceedings. Sorrels is determined to do more than simply establish negligence on behalf of his clients. The attorney is aimed at a systematic investigation of Orion’s practices and procedures.

“There’s simply no excuse for this type of accident,” the attorney said. “We want to know the details and supervision of this driver because if this is a systemic issue, we need Orion to change… to bring about safe transportation of people in our medical community.”

Proving systemic problems beyond the actions of Granados in this fatal crash will be a more significant challenge than simply winning the Rodriguez case. To do the former, the plaintiffs will need to show that company practices—e.g., number of assignments given, pressure applied to complete them in a certain amount of time—invited their drivers to act in a reckless manner. Attorneys representing Orion EMS declined to comment as a matter of policy regarding ongoing litigation.

“It’s just been hard on the whole family,” Adriana said, regarding the death of her mother and the injuries to her father. What should have been a happy occasion—Josefina’s return from the hospital—turned tragic.